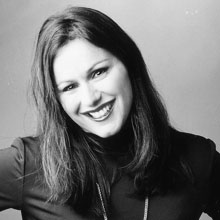 Tania de Jong AM is a leading Australian soprano and social entrepreneur. She founded Creativity Australia and Creative Universe to improve wellbeing, engagement and innovation in organisations and communities. Tania presents keynote speeches globally and consults to multinational organizations on creative leadership for the 21st Century. She is Founder and Executive Producer of Creative Innovation 2010, 2011 and 2012.

She works with a range of migrants and disadvantaged communities through Creativity Australia’s innovative With One Voice choir programs to build social capital, employment pathways and community wellbeing. The With One Voice programs bring together a diverse range of people in different locations enabling individuals to find their voice. When many diverse voices come together as one voice, the outcomes can be transformational!

Tania is considered one of Australia’s most talented sopranos and has performed with the Victoria State Opera, as a soloist with a number of orchestras and has performed in over 40 countries and released 7 CDs with her group Pot-Pourri.

She is Artistic Director and Founder of entertainment booking agency and event production company Music Theatre Australia. She has a Bachelor of Law (Honours) from the University of Melbourne and is a graduate of Victorian College of the Arts.

Her numerous awards include “Outstanding Individual Contribution to Australian Culture”, Churchill Fellowship, a Melbourne Award and Ernst and Young Australian Social Entrepreneur of the Year. She founded The Song Room which has provided access to creative learning for over 250,000 disadvantaged Australian children. She was appointed a Member of the Order of Australia in 2008 for service to the arts as a performer and entrepreneur and through the establishment and development of music and arts enrichment programs for schools and communities. She was inducted into the AGSE Entrepreneurs Hall of Fame at Swinburne University and named Brainlink Woman of Achievement 2009.

In her spare time, Tania is working on The Pianist and The Diva and ECHO – a new music theatre work with Stefan Cassomenos.