Australia should double its pace of artificial intelligence and robotics automation to reap a $2.2 trillion opportunity by 2030, while also urgently preparing to support more than 3 million workers whose jobs may be at risk, according to a new report.

If the rate of automation is doubled, it will take away on average four hours of work each week from Australian workers over the next 15 years, according to a report by economics and strategy consulting firm AlphaBeta.

“The reality is automation changes every job,” economist and director of AlphaBeta Andrew Charlton said.

“It’s not so much about what jobs we will do, but how will we do our jobs, because automation isn’t going to affect some workers, but … every worker.”

But the benefits will only flow into the national economy if workers are redeployed, not retrenched.

For most of Australia’s 12 million workers, it means their jobs will likely change rather than disappear. But about one third of the workforce, including construction workers and machine operators, spend an average 70 per cent of their time on automatable tasks. They may need to find new jobs.

“We [must] ensure that all of that time that is lost to machines from the Australian workplace is redeployed and people are found new jobs and new tasks,” Mr Charlton said.

“If those workers aren’t successfully transitioned, then you lose all the productivity gains. And you have all of the problems associated with long-term unemployment.”

Machines will make work ‘more human’
For the first time, AlphaBeta analysed how Australians spent a total of 20 billion work hours each year, assigning each of those hours to one of more than 2,000 different work tasks and then asking how a worker’s time on tasks could change over the next 15 years.

The tasks most likely to be automated are typically the most dangerous, least enjoyable and often lowest paid, the report says.

Giving them to robots or AI could lead to an 11 per cent fall in workplace injuries, a 20 per cent rise in wages for workers who are redeployed to non-automatable tasks, and an increase in job satisfaction for 62 per cent of low-skill workers as they focus on more creative and interpersonal activities.

“Machines will make human work more ‘human’,” the report says.
AI and robotics are “powerful tools that will change the way we work, take away some of the drudgery and give us the power to do new and exciting things in our work,” Mr Charlton said.

For example, a retail worker might spend nine hours less on physical and routine tasks like stocking shelves and processing goods at the checkout and nine hours more on tasks like helping customers to find what they want and providing them with advice. Teachers might spend less time entering exam scores and more time with students.

Australia lagging on AI and may miss opportunities: Charlton

But Australia could miss out on these opportunities because business is not embracing AI automation fast enough, according to the report, which was commissioned by Google.

“Right now, Australia is lagging,” Mr Charlton said. “One in 10 Australian companies is embracing automation and this is roughly half the rate of some of our global peers.

“It is perhaps the biggest economic opportunity that Australia has over the next 30 years. It is by far the largest source of productivity growth that we can realise.”

If Australian companies want to remain competitive internationally, they need to “double the rate at which [they’re] adopting these technologies and only by doing that will firms create jobs for the future and deliver us a dynamic economy that sustains the wages we want,” Mr Charlton said.

Even at the current rate of automation, the report projects that Australians will spend on average two hours per week more on interpersonal, creative and information synthesis tasks, and less time on routine administrative and manual tasks as they are automated.

For younger generations, the transition could be painful, with fewer entry-level jobs available to support study or launch a career.

“Automation and artificial intelligence take away those simple tasks that used to be done by the youngest and earliest career people in those jobs,” he said.

Re-skilling throughout life will be ‘the new normal’
Education and training courses also need to change to get ahead of technological transformation and ensure future workers have the right skills.

“There will be a whole range of new jobs that can absorb those people — much more intensive in interpersonal relationships or creative activities — and those are the areas where new jobs spring up for young people to take advantage of, if they have the skills and if we prepare them appropriately for that change.”

Australia needs a bold and proactive national policy to support workers most at risk, the report notes.

“Young, well-educated and highly skilled [workers] will likely adapt easily,” the report says. “Others, including low-skilled workers and those nearing retirement age, will likely struggle more” when trying to change jobs.

“The new normal will be for more regular re-skilling throughout our working lives,” he said.

‘Australia has a bad record’ at transitioning workers 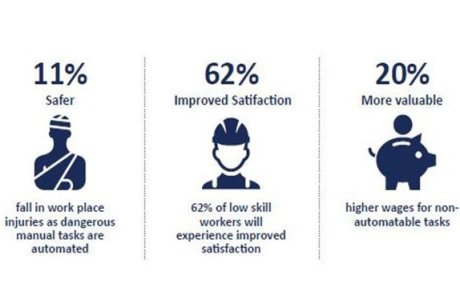 Mr Charlton said the biggest challenge for Australia would be transitioning the workforce to face the new reality of automation.

“So [Australia] has a bad record at successfully transitioning workers out of industries in decline and into new roles and that’s the biggest threat — that we don’t effectively transition workers as these changes move through our economy.”

Mr Charlton told the ABC that both government and business had a vital role to play in the success of the future with automation.

“The role of companies is essential. Their workforces will change and they need to change in order for them to remain competitive and successful,” he said.

“But they also need to recognise the skills and experience of their existing workforce and build on those skills through better in-work training.

“The Government has a role as well in supporting people to have flexibility in their careers — to be on the move between roles and to give them information about new opportunities.”

Jim Stanford, director of the Centre for Future Work, believes benefits from artificial intelligence can only be realised if the impact on workers and communities is taken into consideration.

“If technology is designed and implemented unilaterally by private businesses, with no requirement on them to negotiate with workers and communities, meet minimum standards of behaviour, and even pay taxes, then it will undermine living standards of most people,” he said.