The 4th Industrial Evolution looms, one that is driven by technology disruption and artificial intelligence. Singapore has to rethink its old way of doing things.

The world is on the cusp of the 4th Industrial Revolution, a term coined by Professor Klaus Schwab, founder of the World Economic Forum, referring to the major technology shift from computer systems to integrated cyber, physical, biological and intelligent systems.

Almost everything of what we know, use and do today is based on the existing but rapidly obsolescing 3.0 model that was conceived nearly 50 years ago.

Today, the 4.0 paradigm is fast shaping up as we add intelligent systems, autonomous robots and immersive devices to the mix. It will perturb man-made systems across all domains – industry, business, economics, trade, money, government, geopolitics, social, and even family. I call this Everything 4.0.

Everything 4.0 will be the re-invention – and not an evolution – of 3.0 constructs.

However, as we plan for the future, the most common approach is to engage in 3.0 thinking, extrapolate 3.0 successes and extend 3.0 strategies. Unfortunately, using 3.0 lens to plan for a 4.0 world is not only limiting, but ultimately futile. A paradigm shift needs to be accompanied by a mindset shift.

WHERE SINGAPORE CAN IMPROVE Leaders in business, government and society in Singapore can no longer take an evolutionary 3.0 view of the future. Instead, a radical 4.0 vision is required. Here are three examples of where 3.0 thinking might have constrained Singapore’s future national strategies.

Firstly, on the economic front, the Report of the Committee on the Future Economy, in my view, did not adequately factor in the speed, scope and scale of the transformation to a 4.0 global economy and, as a result, prescribed incremental strategies.

Secondly, in the area of education, we might have fallen into the same 3.0 trap. The extent to which students are taught, drilled and conditioned to perform in standardised tests and competitive examinations could be preparing students to go head-on against next generation artificial intelligence.

Renowned futurist Ray Kurzweil predicts that a US$1,000 (S$1,350) CPU (central processing unit) in a computer will possess the cognitive capability of a human being by 2029. By then, logical reasoning, knowledge acquisition and skills application will be necessary, but insufficient for gainful participation in the economy.

Thirdly, social policies to manage the growing pool of economically inactive adults – such as retired seniors and a potential new class of citizens rendered unemployable by technology – will face tough challenges in the 4.0 future.

Former US president Barack Obama, in a Wired Magazine interview (October 2016), foresees that AI will not only replace low-skilled jobs but also repeatable high-skilled jobs and, therefore, we will have serious debates about universal basic income (UBI) in next 10-20 years. While raising taxes in Singapore is an inevitable prospect, major policy shifts are likely to be needed. 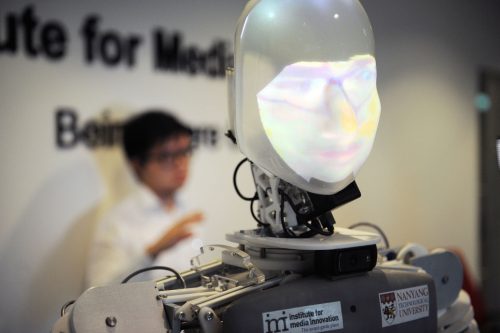 Edgar, a telepresence robot, is one of the two robots showcased at the Nanyang Technological University’s (NTU) demonstration of artificial intelligence press conference. Edgar is a robotic avatar, designed to be the physical representation of a human user who could be miles away. By standing in front of a special webcam, the user’s face and expressions will be displayed on Edgar’s “face”, which is essentially a projection screen.

To develop a 4.0 mindset, it is better to project to the future, create a preferred scenario and plan backwards – a strategic method known as backcasting – rather than plan forward from the present. Forward planning promotes linear thinking which can be dangerous in a non-linear future, while backcasting encourages imaginative thinking and futures design to make the necessary quantum leap.

They become a new class of companies known as the tech-industrial conglomerate, worth upwards of US$5 trillion and collectively responsible for 20 per cent of global production.

Small businesses everywhere are not spared, with 95 per cent failing to survive the digital revolution. In their place, a new breed of techno-enterprises will blossom. Highly networked, dynamic and elastic, these cloud-powered micro-organisations can scale accordingly to real-time market dynamics.

“To develop a 4.0 mindset, it is better to project to the future, create a preferred scenario and plan backwards – a strategic method known as backcasting – rather than plan forward from the present. Forward planning promotes linear thinking which can be dangerous in a non-linear future, while backcasting encourages imaginative thinking and futures design to make the necessary quantum leap.”

yper-connected, autonomous and intelligent technologies are ubiquitous – in factories, offices, schools, hospitals, highways and home, they form self-functioning systems that operate the world with minimal human intervention. This allows enterprises to deliver services at a mere 10 per cent of the manpower intensity from a decade before.

Many of the jobs of 2017 are long gone – these are mostly “value-adding” single-skilled jobs that are more effectively performed by autonomous robots and AI-cloud services.

Welcome to the winner-takes-all economy and workforce, where the big majority loses and only a tiny minority wins. At this point, Singapore has emerged as a leading nation, innovative economy and model society of the 4th Industrial Revolution.

Combining this plausible scenario and a 4.0 mindset, I recommend:

In Singapore today, we have a choice: to let Everything 4.0 happen by chance or to create it by design.

What is missing is an Everything 4.0 mindset that can help us break away from incremental thinking and devise breakthrough strategies to replace obsolete ones that once served us well.