Creative Innovation 2019 – Looking Back on the Conference that changes minds 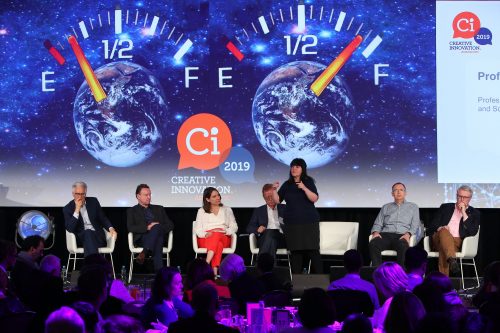 On 26 September 2019 the Committee for the Economic Development of Australia sounded an alarm.  The cause of its concern was Australia’s slipping in the ranking of 63 nations on the International Institute for Management Development (IMD)  World Digital Competitiveness Index[1].

The Index compares digital competitiveness against three key overall criteria: knowledge, technology and future readiness.  While Australia slipped only one place in the overall survey, from 13th to 14th, CEDA warned that we were way down the rankings in more than a few key areas, including:

END_OF_DOCUMENT_TOKEN_TO_BE_REPLACED

Digital Megatrends: A perspective on the coming decade of digital disruption

This report explores plausible futures using methods of strategic foresight pioneered at CSIRO’s Data61. We explore the coming decade of digital disruption through the lens of six interlinked megatrends using a Venn diagram to emphasise their interconnectedness.

A megatrend is a significant shift in environmental, economic and social conditions that will play out over the coming decades. The concept was introduced by US professor John Naisbitt in his best-selling book of the same title in the early 1980s. Today’s megatrends are widely used by large organisations, particularly in the technology sector, to describe trajectories of change taking us toward a new and different future.

‘Robots’ Are Not ‘Coming For Your Job’, Management Is

Nor are ‘robots’ gathered in the back of a warehouse somewhere conspiring to take human jobs en masse. A robot is not ‘coming for’, or ‘stealing’ or ‘killing’ or ‘threatening’ to take away your job. Management is.

This country is rigged in favor of making the very wealthy even wealthier. That’s what Democrats keep saying on the 2020 campaign trail. And it’s what some of the people who have reaped the rewards of this rigged system think too. Abigail Disney, granddaughter of Roy Disney, is one recent high-profile example. On Tuesday, she called out the “naked indecency” of the $65 million in compensation that goes to Disney’s chief executive, Bob Iger. That figure, she noted, is “1,424 times the median pay of a Disney worker.”

The Digital Innovation Festival (DIF), is a unique initiative to develop, demonstrate and promote technology innovation across every sector of the economy and society. DIF2019 runs over two weeks from 23 August to 6 September.

Automation and The Future of Work

For the 8th time in a row, I attended the award-winning Creative Innovation Conference at the Sofitel Melbourne. It never fails to stretch my mind, but this felt like a total upgrade to Human Intelligence 2.0!

Whilst there was an extraordinary array of speakers, the talk that stirred me the most, as it brings things closer to home, is the presentation made by Seckin Ungur, an associate partner in McKinsey Australia’s Public Sector practice. Read the full article