Imagine coming to an event where... 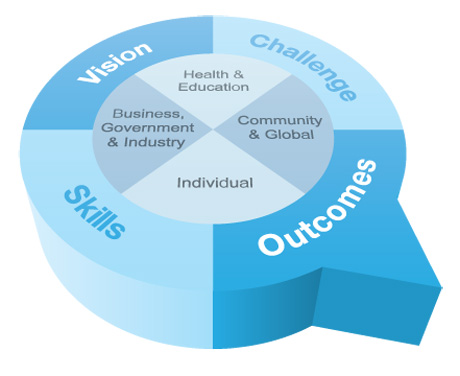 The first digital camera was introduced in the early 1980s. Eastman Kodak declared bankruptcy 30 years later. The Netscape browser was launched in 1994. In 15 years, the U.S. newspaper industry was a shell of its former self.

Apple launched the iPhone in 2007. Six short years later, the former industry king – Nokia – exited the handset business by selling its mobile phone operations to Microsoft. The innovator’s clock is accelerating, meaning leaders today have to confront change of unprecedented ferocity and impact. This poses an existential challenge to many organizations, who cannot survive, let alone thrive, simply by executing more efficiently and effectively.

It also places stress on individuals—who need to develop the ability to confront ambiguity and sometimes jarring shifts—and institutions designed for a linear age.

While the challenge is immense, so too is the opportunity. The waves of disruption affecting our global economy are creating massive new growth markets. There are now more smartphones than people on
the planet, promising unprecedented ability to bring new solutions to people who historically were locked out of so many markets. We now have a chance to bring education and healthcare to hundreds of millions of people in new ways. New technologies have the potential to find effective ways for us to confront climate change, feed the 10 billion people who will populate our planet, and radically reconfigure how we make and distribute things.

Entrepreneurs from around the globe are swarming these and related opportunities, and having impact at unprecedented pace. Consider Uber and Whatsapp. Both companies were founded in 1999. Five years later, the former was worth close to $50 billion and the latter had been acquired by Facebook for $20 billion and grown to more than a half-billion users. That’s not to say the life of an entrepreneur is easy. It’s so easy to start a business today that the second one gets a whiff of success, the race is on, and it is only a matter of time before the next disruptive wave begins.

Large companies can seize these opportunities too, if their leaders rise to confront the challenges of transformation, changing the very essence of their business. Historically the stories of successful transformation are painfully few, but incredibly powerful. Apple transforms from a niche player in a slice of the computing market to the world’s largest company. Fuji acts early, diversifies its business, and thrives where Kodak stumbled.

Australia’s leading banks are embracing digital technologies, moving their businesses in promising new directions. Rising to the transformation challenge requires new mindsets, skills, organizational designs, and more, but leaders that do so have a chance to drive substantial growth and impact.

Ci2016 is a place where you can gain insights into how you can do this in your organisation, your profession, and your life.

This theme will be addressed at the personal, organisational and global level across the major sectors of business, industry, community and government. Sessions will allow delegates the opportunity to expand their scope of creative understanding and learn new strategies whilst also leveraging their innate, but sometimes hidden, right-brained creative capabilities. Artists in residence will create moments of non-verbal content that help to change traditional mindsets.

Using innovative audience interaction the sessions will provide an exchange between presenter and audience. The one-way communication presentation style that stifles many conferences will be transformed by world class dialogues, facilitators, performers, provocateurs and “hot spot” debate centres.

The theme will also facilitate a Deep Conversation around important and challenging issues we face. A series of Master Classes with leading facilitators will enable delegates to take away new strategies and inspiration into their work and lives.

The Gala Dinner will feature discussion, world class speakers and entertainment and will allow for plenty of time for further networking and conversation.

Why the Asia­ Pacific focus?