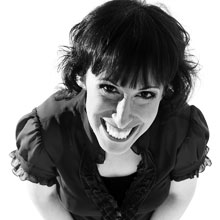 Dr Amantha Imber is a creativity and innovation psychologist. She gives her audiences practical, science-based tools that they can use to immediately get their brain unstuck, get creative juices flowing and uncover great ideas that will lead to business growth – all delivered in a way that engages, educates, and is often, downright quirky.

Unlike many self-proclaimed experts in the creativity and innovation arena, Amantha has both the science (a PhD in organisational psychology) and the clients (including Coca-Cola, LEGO, Medibank Private, Red Bull, Deloitte, Vodafone and Westpac) to back her up.

She works across Australia, New Zealand, the UK, the United States, and Europe helping turn people into creative dynamos.

Amantha is a regular media commentator on creativity and innovation, and has appeared on Today, Mornings with Kerri-Anne, Insight, and ABC Radio. She writes a regular column on science-based innovation for Fast Thinking, is an in-demand conference speaker around the world on creativity, and has helped literally thousands of people solve problems more creatively and as a result, bring better innovations to market.