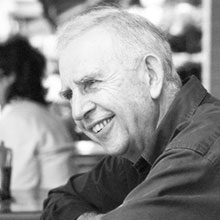 Presentation:
‘The desires that drive us to connect’ (November 18, 9.00am)

Hugh Mackay is a psychologist, social researcher and novelist. He is the author of thirteen books, including six bestsellers. His latest book is What makes us tick? The ten desires that drive us.

In recognition of his pioneering work in social research, Hugh has been awarded honorary doctorates by Charles Sturt, Macquarie, NSW and Western Sydney universities. In 2004, he received the University of Sydney’s alumni award for community service.

Hugh is an honorary professor of social science at the University of Wollongong, a former deputy chairman of the Australia Council, a former chairman of trustees of Sydney Grammar School, and was the inaugural chairman of the ACT government’s Community Inclusion Board. He has been a newspaper columnist for over 25 years, and is a frequent guest on ABC radio.