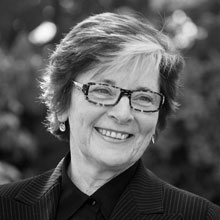 Professor Clarke is Laureate Professor in the School of Botany at The University of Melbourne. She is a Fellow of the Australian Academy of Science, Fellow of the Australian Academy of Technological Sciences and Engineering, Foreign Associate of the National Academy of Sciences (USA) and Foreign Member of the American Academy of Arts and Sciences and a Fellow of Janet Clarke Hall in Melbourne. Professor Clarke was appointed as an inaugural Fellow (2007) of the American Society of Plant Biologists in 2007. She has also served as President of the International Society for Plant Molecular Biology (1997-1998).

She was appointed Officer in The Order of Australia in 1991 and Companion of the Order in 2004. She has served as Chairman of the CSIRO Board (1991-1996), Lieutenant Governor of Victoria (1997-2000), Ambassador for Biotechnology for Victoria (2001-2004) and on many State and Commonwealth Government committees.

Professor Clarke served as a Director on a number of public companies including Alcoa of Australia Limited (1993-96), Woolworths Limited (1994-2007), WMC Limited (1996-2005) and Fisher & Paykel Healthcare Limited (2002-2008). She recently retired as a Director of Hexima Limited, an Australian company that focuses on agricultural biotechnology.  She also serves on various advisory boards including the Australian Research Centre for Urban Ecology (ARCUE) (2004- ) and The Australian Advisory Board of The Nature Conservancy (2009- ).