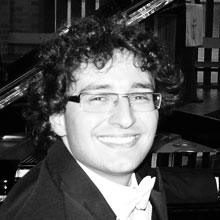 Melbourne pianist, conductor and composer Stefan Cassomenos studied with Margarita Krupina, Stephen McIntyre, Ian Munro, and Michael Kieran Harvey. Stefan has appeared as a soloist in St Petersburg, Tallinn, Warsaw, Krakow, Athens, Rome, Milan, Amsterdam, London, Bangkok, and Tokyo. His 2007 London debut was described, in a Musical Opinion review by John Amis, as ‘alive, passionate, and dramatic… as if the pianist’s life depended on it. This was a prodigious London debut by a formidable talent.’

Stefan has performed concerti as a soloist with Adelaide Symphony Orchestra, Melbourne Youth Orchestra, Royal Melbourne Philharmonic Orchestra, Orchestra Victoria and many others. Stefan completed his studies at the University of Melbourne and ANAM. In 2008, he was awarded travel scholarships by the Youth Music Foundation at the British School in Rome, and as their Oxford Scholar participating in the Philomusica Piano Festival at Oxford University. In 2009, he was a prize-winner at Trieste International Chamber Music Competition and Melbourne Asia-Pacific Chamber Music Competition. Stefan’s 2011 engagements include concertos with orchestras, solo performances throughout Australia and recitals as a member

of Duo Axis with cellist Michael Dahlenburg and The Pianist and The Diva with Tania de Jong.

Stefan’s compositions have been performed by the Symphony Orchestras of Melbourne and Adelaide, and his compositions are commissioned and performed regularly. Stefan was named Composer-in-Residence for Creative Universe’s Creative Innovation 2010, culminating in the premiere of his third Piano Concerto The Art of Thought at the Melbourne Recital Centre. He has recently been awarded the Lyrebird Music Society Commission for 2012.