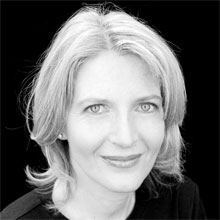 Leading science journalist, Author: Stem Cells: Controversy at the Frontiers of Science and The Genome Generation

Ever since she can remember, Elizabeth (Ella) Finkel has been titillated by science. It’s an energy that fuelled two careers. First, as a research scientist at the University of California in San Francisco, she studied the age-old mystery of how a mush of cells acquires the plan to design a body. Second, as a Melbourne-based science writer for the last twenty years, she has told the stories of other peoples’ scientific adventures.

Ella loves nothing better than to journey to the frontiers of science and bring back stories for scientific and lay audiences. Her scientific dispatches generally go to the American magazine Science; her popular dispatches to Cosmos magazine, the multi-award winning magazine she founded with husband Alan Finkel, Wilson Da Silva and Kylie Ahern. She also occasionally contributes items to ABC Radio National’s Science Show. She has won numerous awards for her work including the prestigious Michael Daley Award for one of her radio broadcasts, multiple nominations at the Eureka awards, winner of multiple Bells awards and the National Press Club’s Higher Education Journalist of the Year in 2011.

With the publication of her first book, “Stem Cells: Controversy at the Frontiers of Science” in 2005 by ABC Books, her writing underwent a major transition to the genre of creative non-fiction where the non-fiction writer employs the tools of the novelist: character, place, plot and voice. “Stem Cells” won the Queensland Premier’s Literary Award and was shortlisted for the Victorian Premier’s Literary Award and the Eureka Award for Advancing the Public Understanding of Science.  In January 2012 her second book, “The Genome Generation,” was published by Melbourne University Publishing. The Canberra Times described it as “science writing of the highest order”. The Weekend Australian described her as a “scientist with a journalist’s genes”.

Besides science, Ella’s other passions are singing, ballroom dancing, hiking and last but far from least spending time with her three beautiful boys: husband Alan and sons Victor and Alex.