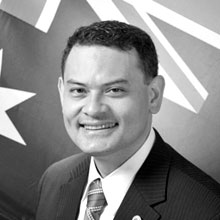 Michael Johnson is CEO of Kokoda Capital Group, a privately owned firm with premium clients in the Asia-Pacific region. Kokoda focuses on the commodities and wider energy sector but is also active in financial services, retail, F&B and property. The firm also has holdings in several media, entertainment and sporting related entities. Michael is also a Director of Rugby Channel Online in a partnership with Fiji TV broadcasting rugby on Google’s global online platform. Michael is also a Director of Myanmar Global Capital Partners (MGCP). Michael is also CEO of Royal Vitamins International Limited, a company manufacturing vitamins in a unique liquid format that has the potential to completely transform the global vitamins industry. Michael is President of the Australia-Asia Business Council and is also a former Member of the Australian Parliament rising to become Federal Parliamentary Whip in 2007. Born in Hong Kong to a Chinese mother and Australian father, Michael is passionate about deepening and widening the Australia-Asia relationship. Michael was the first Member of the Australian Parliament to have a part Chinese heritage and one of the youngest when elected in 2001 at the age of only 31.

Michael was educated at the University of Queensland where he holds dual degrees in Arts and Law. He was also educated at the University of Cambridge and the University of Birmingham where he holds a double Masters Degree in international relations and political science. He is also a graduate of the the Kennedy School of Government’s Executive Programme at Harvard University and has studied at Shanghai’s Fudan University and Beijing’s Capital Teachers University. Michael has spoken at conferences and events all over Asia. He has given interviews on all the world’s global media networks from CNN to CCTV. Michael sits on the Global Council of the Asia Society and is a Member of the World Chinese Economic Forum Advisory Board. He is a regular political commentator on Australia’s Sky News network. Michael has travelled all over Asia from Burma to North Korea. Michael is 42 and lives in Brisbane with his wife, Huyen, and their six old son, Ryan.