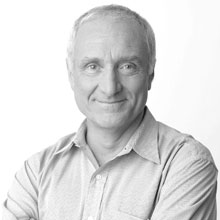 Moderating Deep Conversation:
Now to Next: How will Science and Technology help solve our problems? (November 28, 7.00pm-9.oopm)

Robyn Williams is a science journalist who is as prominent on radio as he is on television. He has presented Radio National’s Science Show since 1975 and narrated highly respected television programs including Catalyst and Nature of Australia. He appeared alongside David Attenborough on World Safari.

He is renowned for making the complexities of science accessible and enjoyable for almost everyone and three of the ten books he has authored are included on the Higher School Certificate list.

In 1993, he became the first journalist elected as a Fellow of the Australian Academy of Science. In 1988, he received an Honorary Doctorate in Science from the Universities of Sydney, Macquarie and Deakin. That same year he was appointed AM in the 1988 Australian Bicentenary Honours list.

He has been elected a National Living Treasure by the National Trust and he even has a star named after him by the Sydney Observatory.