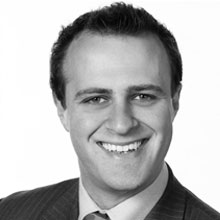 Tim Wilson is an international public policy analyst and commentator. He’s currently Director of the Intellectual Property and Free Trade Unit at the Institute of Public Affairs – the world’s oldest free market think tank. Tim also serves on the Department of Foreign Affairs and Trade’s IP industry consultative group as well being a Senior Fellow at New York’s Center for Medicine in the Public Interest.

He regularly appears on Australian and international television programs such as ABC1’s Q&A and The Drum, Sky News’ The Nation, radio on 3AW and ABC774 and in the print media, particularly The Australian. He currently hosts the Talking Policy segment on 3AW. In 2009, The Australian newspaper recognised him as one of the ten emerging leaders of Australian society, and is a recipient of an Australian Leadership Award from the Australian Davos Connection.

Tim is currently a Director of Alfred Health and formally served on the Board of Monash University as well as a number of service companies in the tertiary education sector.

He’s worked in international development across South East Asia, consulting and politics, including delivering Australia’s aid program for the Vietnamese government to host APEC and advising State and Federal politicians.

At University Tim was twice elected President of the Student Union. Tim is currently completing a Graduate Diploma of Energy and the Environment (Climate Science and Global Warming) at Perth’s Murdoch University. He has a Masters of Diplomacy and Trade and a Bachelor of Arts from Monash University, a Diploma of Business and has completed Asialink’s Leaders Program at the University of Melbourne.