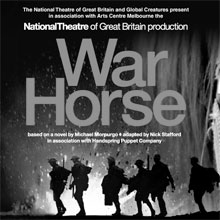 Nick Stafford’s stage adaptation of Michael Morpurgo’s book, War Horse, is a magnificent drama which tells the heart wrenching story of Joey, the beloved horse of a boy called Albert, who is sold to the cavalry at the outbreak of World War I and shipped to France. He’s soon caught up in enemy fire, and fate takes him on an extraordinary odyssey, serving on both sides before finding himself alone in no man’s land. But Albert cannot forget Joey and, still not old enough to enlist, he embarks on a treacherous mission to find him and bring him home.

At its heart are astonishing puppets strong enough for men to ride, created by South Africa’s Handspring Puppet Company, who bring breathing, galloping, charging horses to life on stage.

Life size horses traverse the stage, their flanks, hides and sinews built of steel, leather and aircraft cables. Actors, working with these dynamic puppets, will lead Australian audiences on an emotionally-charged journey through history.

Winner of five Tony Awards including Best Play, War Horse has played to packed houses in London and on Broadway since opening, and has been praised by critics everywhere, with the Sunday Times (UK) calling it ‘The Theatre Event of the Decade’ and the Daily Mail (UK) proclaiming it ‘A Uniquely Moving Spectacle’.