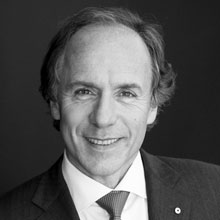 Presentation:
The Electric Planet: Seeing the possibilities of an electron economy over an oil economy (November 29, 9.00am)

Chancellor of Monash University; President of the Australian Academy of Technological Sciences and Engineering; Co-founder and Chairman of Cosmos Magazine; Chairman Australian Centre of Excellence for All-Sky Astrophysics; CEO of STELR Education.

For three years until 2012 Alan was involved in the provision of low-emissions electricity to operate electric vehicles. Previously, for nearly twenty-five years, Alan was the CEO of Axon Instruments, a California-based company that made precision scientific instruments used at pharmaceutical companies and universities for the discovery of new medicines.

Alan is passionate about educating the next generation. He established the Australian Course in Advanced Neuroscience to provide advanced training to early-career scientists and he leads a secondary school science program named STELR that is currently running in nearly 350 secondary schools around Australia.