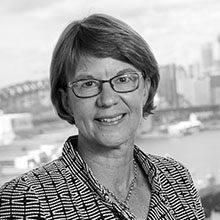 Presentation:
From Disruption to Growth: Leading people and customers  (8.45am, Wednesday March 25th)

Alison joined Coca-Cola Amatil as Group Managing Director in March 2014.  Alison is a non-executive director of The Centre of Independent Studies.

Alison’s previous roles include Chief Executive Officer of agribusiness GrainCorp Limited and of Berri Limited, the market leader in Australian juice, and Managing Director of Regional Banking at ANZ.  Alison spent 10 years at McKinsey & Company from 1989-1999 and became a partner of the Firm in 1996 before moving to ANZ as Group General Manager Strategy, reporting to the CEO.

Alison has been a non-executive director of Australia and New Zealand Banking Group Limited, Woolworths Limited and Just Group Limited.  She is a former Victorian President and National Board Member of the Australian Institute of Company Directors.

Alison holds a Bachelor of Commerce (University of Tasmania), is a Fellow of the Institute of Chartered Accountants, the Financial Services Institute of Australasia, and the AICD.