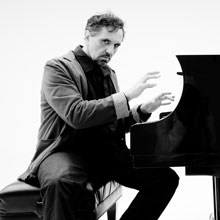 Composer in Residence; Musical polyglot in the tradition of Bernstein & Previn; global pianist, composer and performer

Joe Chindamo is musical polyglot in the tradition of Bernstein and Previn. He is routinely described as one of the best jazz pianists in the world, though his art transcends jazz, having composed concertos, chamber music and film music. He possesses an uncanny ability to personalise anything which enters his orbit, as is evident in his work with violinist and duo partner Zoe Black.

His formidable pianism has earned him admiration from the classical elite. In 2008 and 2011 Chindamo was invited to perform in Italy by pianist Michele Campanella. An enthusiastic recommendation by Nikolai Demidenko led to an invitation to perform a Mozart piano concerto with QSO in Nov 2013.

Joe Chindamo has performed concerts all over the world, including Umbria Jazz Festival, Tokyo Dome and Lincoln Centre in New York. He’s won a plethora of awards, including several ARIA, & BELL awards. He also won the MO award for jazz instrumental performer of the year in 2002 and 2004.

Several of his 20 CDs have topped the charts in Japan, three of them reaching Number 1 on the Japanese charts.

In 2013 he received an arts council grant to compose his first String Quartet for Sydney based Acacia Quartet. His Toccata for solo violin was one of only four Australian compositions chosen by performers at the recent ABC Young Performers Competition and was performed at the finals by Ann Marie Johnson.

Throughout this year, he has appeared with Zoe Black at the Piers Lane’s Townsville Australian Festival of Chamber Music and Anna Goldsworthy’s Port Fairy Spring Festival (where he also took part in a team performance of Liszt’s ‘Years of Pilgrimage’ with 4 of Australia’s top classical pianists), The Canberra Street Theatre, The Melbourne Recital Centre, Melba Hall, Sandgate Festival by the Sea and the Peninsula Music Festival.