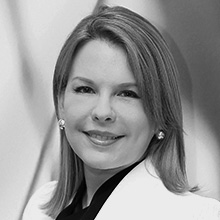 Joyce Phillips is CEO Global Wealth and Group Managing Director and Management Board member at ANZ responsible for Marketing and Innovation.  During her career Joyce has held a number of senior roles in banking and financial services with global and regional responsibilities. In 2014, Joyce was appointed to the Board of Directors, of Reinsurance Group America, serving on the Compensation Committee and Nominating & Governance Committee.

Prior to joining ANZ in 2009, Joyce was President and Chief Operating Officer at American Life Insurance Company (ALICO) a subsidiary of American International Group, Inc. (AIG) which had operations in 55 countries.

Joyce joined ALICO from Citigroup, where she was head of International Retail Banking. In that role she was responsible for strengthening product distribution and expansion in Citigroup’s global retail banking franchise in 42 countries. Business lines under her leadership included online banking, loans, deposits, investments and insurance.

Joyce joined Citigroup in 1999 from GE Capital, where she held various management positions in the Global Consumer Finance Division.

Joyce was named in the U.S. Banker “25 Most Powerful Women in Banking and Finance” list in 2006, 2007 and 2008. She has an MBA from the Stern School of Business, New York University and is fluent in Japanese.