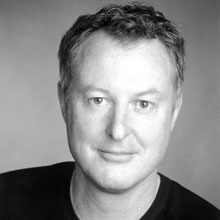 Russell is a consummate entertainer and MC for corporate and community events. He also has over 20 years’ experience in devising and leading communication, team-building, leadership and presentation workshops for management training and professional development programs. He was a founder of corporate entertainment dynamos Troupe Du Jour, and now runs The Decent People – delighting audiences and inspiring teams.

He is best known as a comic improviser, stage actor, and for his award winning JEST LIKE DANNY KAYE. Russell also hosts the hilarious improvised musical, SPONTANEOUS BROADWAY, which has played to sold-out audiences everywhere, including The Sydney Opera House. Currently he is studio audience warm-up and contestant audition host for FAMILY FEUD for Fremantle Media/Network 10.

Russell is the only Australian to have appeared on WHOSE LINE IS IT ANYWAY? (UK 1993), and is constantly and mysteriously recognised as Father Ricky from Lano and Woodley.

Since graduating at Rusden with a B. Ed. In Drama and English, Russell has acquired a diverse range of skills in the performing arts, and in corporate entertainment, coaching and facilitation. His passions are creative collaboration and agile thinking, and his mission is positive engagement with audiences, clients and colleagues. Russell combines serious skills and messages with having a good time!