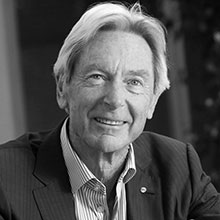 Mr Ferris was appointed as Chair of the Innovations and Science Australia Board in November 2015. He has been the Executive Chairman of CHAMP Private Equity since its formation in 2000, and of its predecessor, Australian Mezzanine Investments Pty Ltd (AMIL), which he co-founded in 1987 with Joseph Skrzynski. Mr Ferris is a 45-year veteran of private equity in Australasia, founding Australia’s first venture capital firm in 1970.

Mr Ferris joined the expert panel for the Federal Government’s Strategic Review of Health and Medical Research in October 2011.

Mr Ferris was made an Officer of the Order of Australia in 1990 for services to the export industry and in 2008 was made Companion in the Order of Australia for his philanthropic activities, as a leader in support of medical research and his role in the establishment of the private equity sector in Australia. Awards honouring Bill’s contribution to the private equity sector include the most recent award: Leader of the Year, Asia-Pacific, in the Private Equity International Awards 2013. Past awards include: the first Asian Venture Capital Journal Lifetime Achievement Award (November 2008), the first AVCAL Lifetime Contribution Award (September 2008) and Entrepreneur Champion in the Ernst & Young Entrepreneur of the Year Award 2005.