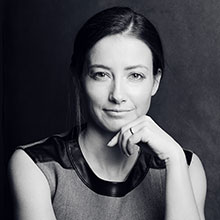 Hacking Failure: The Psychology of Basic Human Fears and How to Overcome Them (11.30am – 1pm, Tuesday November 8th)

Patrycja Slawuta is a New York-based research and entrepreneur. She holds a master’s degree in expertimental social psychology and her PhD appears to be permanently on hold in service of her business: SelfHackathon. Born in Poland, Patrycja is a connoisseur of human nature, particular the complex and non-linear.

Patrycja created SelfHackathon to serve those who crave life-long learning. SelfHackathon is a platform that bridges science, personal development and technology. SelfHackathon partners with top scientists and world-class experts to break down complex concepts (such as confidence) into easy to understand “hacks” that can be implemented immediately.

SelfHackathon consists of three businesses: 1.) coaching world-class individuals to higher levels of performance, 2.) educational immersive ‘SelfHackathon’ events for high performing individuals, and 3.) corporate consulting for some of the most innovative and significant brands in the world.

Patrycja’s work has been featured in CNN, INC Magazine, Business Insider, The Observer, Huffington Post, Tech Crunch among others.

She has been a contributing writer on science for Fortune Magazine, Forbes and Huffington Post. Patrycja has spoken extensively on the topic of hacking, rewiring and upgrading the human mind at top technology conferences including Europas (Tech Crunch Awards), Social Media Week, Internet Week, Oui Share, and TOA Berlin.

Patrycja studied at the University of Warsaw, where her research centered around moral emotions of guilt and shame. Subsequently, she conducted research at Basque Country University in Spain focusing on social narratives. Patrycja has also researched the embodiment of emotions at the New School University in NYC as a part of a NSF-sponsored grant. Her academic work has presented at various scientific conferences and published in various articles and book chapters on social psychology.

Finally, Patrycja believes firmly in the power of living a well-rounded life. She has completed 19 marathons (with the Berlin Marathon as the 20th) and organized TEDx Bushwick. As practicing digital nomad, Patrycja splits her time between Manhattan, Silicon Valley, and Europe.