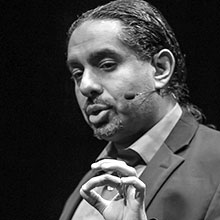 Ramez Naam is a computer scientist and the award-winning author of five books, including the Nexus series of science fiction novels and the non-fiction The Infinite Resource: The Power of Ideas on a Finite Planet, which charts a course to innovate our way past challenges in energy, food, water, and climate. Ramez’s books have won the Prometheus Award, the Endeavour Awards, been listed as an NPR Best Book of the Year, and have been shortlisted for the Arthur C. Clarke award.

Ramez works around the world on innovation, exponential technology, and solutions in climate and energy. He teaches at Singularity University at NASA Ames. His work has appeared in or been quoted in The New York Times, The Wall Street Journal, The Economist, The Atlantic, Slate, Business Week, Discover, Wired, and Scientific American. He’s appeared on MSNBC, on Yahoo Finance, and has spoken to audiences on four continents, from Istanbul to Shenzhen; from Buenos Aires to Washington DC.