Wired for the Next: What will humans, think, do and be in the not-so-distant future 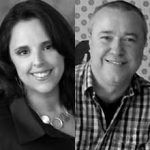 Principals at Kedge – a global strategic design, foresight, creativity, and strategic design consultancy. Before joining Kedge in early 2012, Yvette led the effort to establish the Future Workforce Insights division at The Walt Disney Company. Prior to founding Kedge, Frank worked for 15 years as a leadership coach and developer with entrepreneurs. He has worked on Strategic Foresight projects for companies such as Kraft, Mars, Marriott, and The Walt Disney Company. In 2015, Yvette and Frank founded The Futures School, a 3-day, foresight certificate program.

About the Master Class:

Is the speed of technological, economic, environmental, political, and social change “rewiring” humanity, and thus redefining work, income, consumption, education, and lifestyles in the 21st Century?

Many of today’s experts and thought leaders agree that our environment of accelerating volatility, uncertainty, complexity, and ambiguity is ushering in a new era of human development, and this in turn will mean that we must intentionally reframe our mindset, activity, and purpose as a species.

In this creative and empowering session, we will dive into what humanity will “think, do and be” in light of the unprecendented changes taking place all around us. The session will give participants the chance to explore what those radical changes might mean for their personal journeys, their organizations, and their industries as they move into the future.

You will learn to: