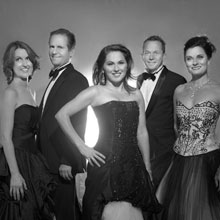 With 40 overseas tours and 7 CDs under their belt including Europe, Asia and USA, Melbourne’s Pot-Pourri presents their unique and innovative blend of music theatre, cabaret, opera, magic, didgeridoo and comedy in a superbly entertaining show that is so hot it sizzles! These talented artists hit those high C’s in Opera, belt out Broadway, seduce with song, dance up a storm, create magic and stir your soul with haunting ballads! Described as brilliantly talented, funny, fresh, moving and must-see… do not miss them!

Recently named Australian Event Entertainers of the Year by BT Publishing, Pot-Pourri is Tania de Jong AM (soprano), Rebecca Bode(soprano), Jon Bode (tenor), Jonathan Morton (baritone) and Anthony Barnhill (pianist). These 5 talented artists have all performed with Australia’s major musical and opera companies and performed internationally as soloists. Pot-Pourri has an extensive touring schedule and has appeared at major venues such as the Melbourne Concert Hall, Sydney Town Hall, Burswood and Wrest Point Casinos. The group has toured throughout many parts of the USA, Europe, New Zealand and Asia.

They were selected as one of the companies to represent Australia internationally for the Reaching the World program of The Sydney Olympic Games and were invited to perform at the World Expo 2000 in Hannover as a result of a standing ovation at the Australia Germany Association Conference Gala Dinner in Brisbane. Pot-Pourri also create tailor-made performances for your conferences, dinners, awards nights, launches, private and special events.

“Sublime musicality is what Pot-Pourri is all about: their voices, the evergreen songs they choose and their pianist are all world class. Pot-Pourri harmonies are spine-tinglingly glorious to hear and they are beautiful and inspiring. Their show is a joyous thing to experience!” ArtsHub.